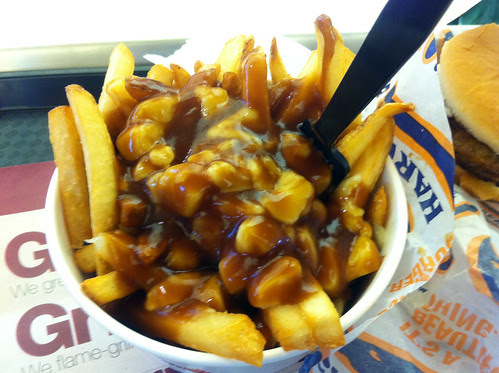 Harvey's Poutine - Winnipeg International Airport, originally uploaded by Cody La Bière.
Ahoy hoy! It's been quite a while since I did my last review. Frankly, it seemed like the last review's poutine made me swear off poutine for a while! Well I'm back.

On October 12th I went into Winnipeg for some french language testing, to see how well my French is. I took the (oh so awesome) Greyhound bus to and from Winnipeg. I made a quick stop at the Winnipeg International Airport (er James Armstrong Richardson International Airport) for a bite to eat.

I was in the mood for poutine so stopped at Harveys, famous for their grilled burgers customized to your liking. So what did I think of it?

It's an alright poutine, one of the better ones sold by Canadian fast food restaurants. Would I get it again? It depends if I'm craving a poutine again and right near a Harveys. If it was a regular tuesday and I just wanted a bite to eat, I would probably just get a regular meal. However.. the fries are much better as part of the poutine than as just fries on their own.
Posted by Cody Lobreau at 18:43