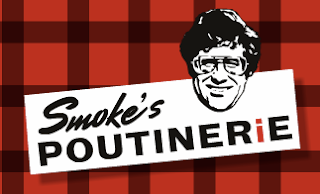 You know how I've been half-assedly looking for a poutine in Friendly Manitoba, gave up, then start up this site. It appears Manitoba may be getting its very first poutinerie.


According to Smokes Poutinerie's website, the Toronto-based poutinerie will tentatively be opening in Winnipeg May 30 at 131 Albert Street, which appears to be really close to the headquarters of the kick-ass Winnipeg Folk Fest. I will be visiting the poutinerie as soon as it opens, so I can see what the fuss is about. Frankly, this will very easily be the best poutine shop in all of Manitoba, why? All other poutine is mediocre, doesn't use curds, uses frozen McCains fries, etc. It doesn't take much to make a good poutine in this province.  I welcome Smokes for their move into Manitoba, as someone who desperately craves a poutine, this may turn into a new tradition for whenever I'm in Winnipeg.

I look forward to checking out Smoke's Poutinerie and hint hint, I would like to be at the opening celebrations ;)

UPDATE (April 30, 2011): Smoke's Poutinerie will be officially opening on May 16. I hope you get to check out Manitoba's first poutinerie and experience the curdy goodness sometime!


Yet another UPDATE: May 30th now due to "difficulties."
Posted by Cody Lobreau at 02:50