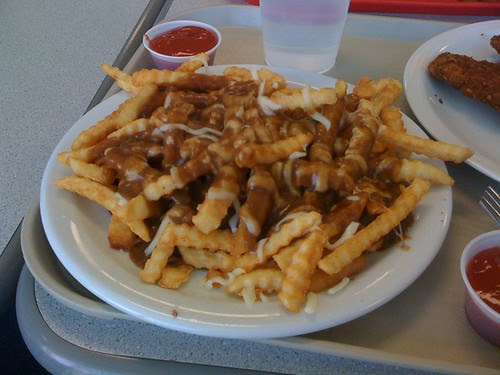 Prairie poutine.. this is just wrong, originally uploaded by Cody La Bière.
If you live in Manitoba, Saskatchewan or anywhere rural, really, you have probably had a poutine that looks similar to the photo above. Slop like that is a disgrace to poutine. People from here don't know that what they're eating is slop, mainly because they've never had the pleasure of eating a poutine consisting of a mountain of curds and delicious gravy.

This is called a Prairie poutine. What is a prairie poutine exactly? It's a poutine generally found in Manitoba and elsewhere far from Quebec that generally consists of McCain french fries; usually these are the usual shoe-string variety, but can be crinkle cut as well. The gravy is usually a random gravy using the drippings of whatever the kitchen is cooking, quite often a low quality gravy, sometimes not; and lastly, covered with shredded mozzarella cheese. Prairie poutine never has curds - that would make it just a "poutine." Some local restaurants here in Brandon, Manitoba also use Monterrey Jack/Cheddar and other various types of shredded cheeses on this poutine. Prairie poutine looks like slop on a plate, but to the average Manitoban, is "delicious". Well, not to me, of course! Once you try a real poutine in Quebec, or even Ottawa, Toronto or Vancouver - you realize that this "prairie poutine" isn't that great at all.

It's not that curds are impossible to find for poutine on the prairies. Nearly every grocery store here in Brandon, Manitoba sells curds from Manitoba's own Bothwell Cheese Company. Manitoba has a pretty decently sized cheese industry, so that's no excuse to have to settle for less than curdlicious. There is also a French monastery outside of Holland, Manitoba that makes a very fine cheese.

What can we do to stop eating "prairie poutine?" Switching to curds is one essential part of the recipe. The gravy is a bit difficult as everyone has a personal preference to what sort of gravy they prefer - some like a vegetarian variety, others like a nice thick beefy gravy, others absolutely hate gravy! Lastly, the fries - homemade is always key, but when you run a busy diner, it's near impossible. So, that may be something that may be near impossible to change.

Shredded cheese belongs on nachos and pizza, not on a poutine! Vive la poutine!
Posted by Cody Lobreau at 19:54