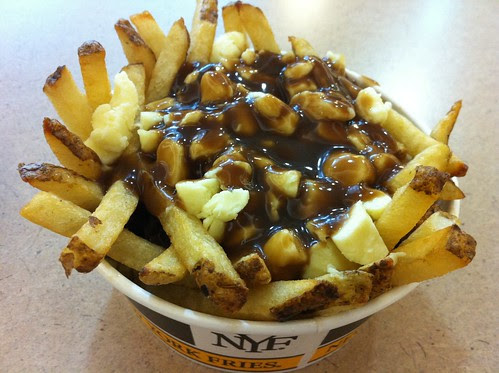 New York Fries' Poutine, originally uploaded by Cody La Bière.
For a person who considers himself a poutine connoisseur, I sure don't eat much poutine. The last time I had a poutine was back in October or so. So, it's been five or so months since I last had a poutine to review, and instead of reviewing a poutine by a local mom-and-pop restaurant, I chose to review a poutine by New York Fries. I've had New York Fries' poutine before, several times really. But I hadn't have one in close to a year now and felt that it was time to give it an actual review.
I went down to the New York Fries kiosk at the mall here in Brandon, MB. I was quite hungover to tell the truth. The very last thing I was craving was a poutine, especially one from New York Fries. Immediately as soon as I got to the kiosk, I saw a sign that said "Butter Chicken and Braised Beef Poutine, Coming Soon!" What I don't understand is why specific New York Fries have the specialty poutines, while ones like here in Brandon, Manitoba don't yet. Maybe it was a limited test run or something.

I ordered a regular poutine, no drink or anything else. It came to $5.09 including PST & GST, so pretty reasonable priced. 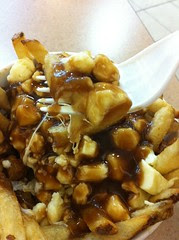 New York Fries' Poutine sure isn't what I'd consider quality by poutine standards. However, if you are looking to fill a poutine-less void, this poutine can help with that.
Lastly, I've always had theory that if you eat a poutine after the bar, it can help prevent a huge hangover. This can also be true for when you already have a hangover.
Posted by Cody Lobreau at 00:16