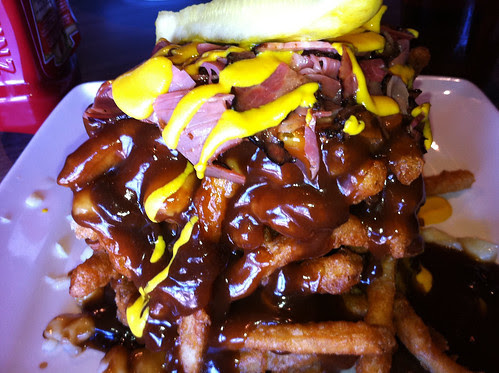 Montreal Smoked Meat Poutine - Joe Beeverz, originally uploaded by Cody La Bière.
This is likely the largest poutine I have ever eaten in my entire life. Hey, I'm a big guy, but even a monster of a poutine is just too much for one person. To see how it compares to myself: www.flickr.com/photos/codyrl/5932985636/

This was at Joe Beeverz pub in Brandon, Manitoba.

I already reviewed their Regular Poutine a few weeks back, so this isn't going to be much of a review.

The poutine is literally a MOUNTAIN of fries, drizzled with a decent amount of hot gravy, with a respectable amount of curds, then montreal smoke meat, a drizzling of mustard, and to top it off - a pickle slice!

Oh wait, there's one thing I forgot to mention, there are melted, oozing curds right in the MIDDLE of the poutine, which acts as a bit of a surprise to many. The more curds the better, amirite?

If you were going to try it, come prepared very hungry, or bring a friend and dig in - this is very much a 2 person poutine.

The montreal smoked meat wasn't bad, nice thin slices. However, I'm not a fan of mustard, so I'll probably get it without mustard next time.

Compared to the Smoke's bacon poutine I had the other day, this is much more of a bang-for-the-buck.

The fries were a bit oily for my taste, but that didn't ruin the experience.

Pro:
*Mountain of poutine - enough to feed two (or possibly more people).
*Lots of curds
*Curds in the MIDDLE of the poutine!
*Better value than Smoke's poutine
*Did I mention it was a mountain of poutine?

Con:
*Not a fan of mustard
*Fries were a bit oily
*TOO. MUCH. FOOD! But that's also a good thing, you won't leave hungry.


I hope they come out with even more wacky poutine variations, bacon poutine would always be nice, oh and bison poutine!
Posted by Cody Lobreau at 18:46