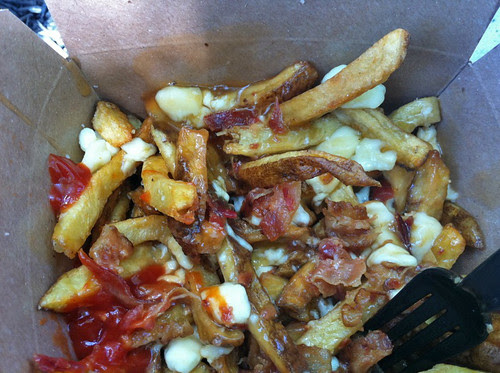 Bacon Poutine at Smokes Poutinerie, originally uploaded by Cody La Bière.
I finally did it, the poutineur in me finally checked out Smoke's Poutinerie in the Exchange District of Winnipeg. I ordered the Bacon Poutine, which is nothing fancy but at the same time.. it's something different than just a plain poutine. 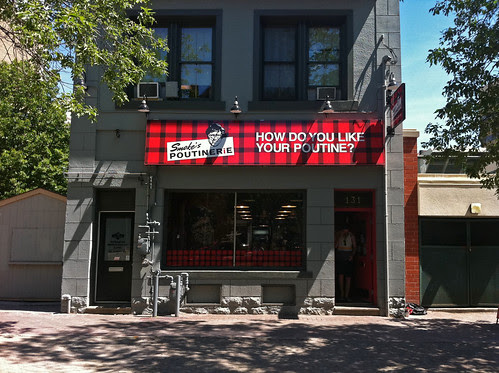 Lots of friends of mine were mixed on what they thought of Smoke's. Some of them thought it was heaven on earth, others found it to be not worth the money. I, as a poutineur, finally got to see how it compared to other poutines.

I had a bit of a hard time finding the location, as I'm fairly bad with directions downtown, especially it being right in the middle of Exchange District, but after 45 minutes of walking, I finally found it. I walked in around 2PM on a hot summer day. There wasn't much of a line, but there was around 8 people waiting for their poutines. I found the poutinerie a bit cramped. After 10 minutes of waiting, I got my poutine, faster than some restaurants. It was just under $10 for the regular sized bacon poutine and a bottle of Pop Shoppe Root Beer (one of the best root beers in Canada). I quickly noticed that the seating was very minimal. Possibly only room for a dozen or so people? I'm bad at guestimating so it could easily be more. This isn't bad in the middle of summer when everyone wants to sit outside in the shade, but during lunch hour in middle of winter, I doubt many would want to sit outside. 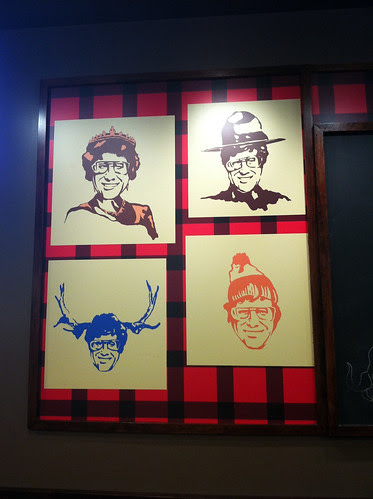 I opened the box, quickly looked it over to see what I was dealing with. It was a large heaping portion of fries, curds, gravy and bacon. I took the first bite, trying a sauceless, curdless fry. The fry wasn't bad, not great but has a bit of a sweetness to it (but not as sweet as Red Potatoes). The first few forkfuls were quite nice. There was a minimal amount of squeak when biting into the curds, something I haven't heard since I lived in Quebec City. The curds were much more mozzarella tasting than the average curd, which isn't bad but these aren't the best curds I've had, but still better than shredded cheese, of course. Then wham.. there's the gravy. Yuck. I've never been a fan of gravy, but in poutine - it just works. This sure isn't gravy to me.. it tasted like pizza hut grease meets bacon grease. Overly salty, and made my lips and tongue feel greasy long after I finished the poutine. I've had lots of bad poutines, but quite often the gravy is alright. Maybe it's a bad batch of gravy? Maybe it actually was bacon grease? I don't know. I just didn't like it.

I managed to continue eating. The gravy made almost all the fries soggy, limpy and somewhat reminiscent of biting into a piece of undercooked potato. Well, it must not have been that bad as I did finish EVERY bite.. including the little bits of curds at the very bottom of the box.

Will I go back? As much as the gravy ruined the meal, I probably will - with friends. However, next time I'll try the vegetarian gravy instead. 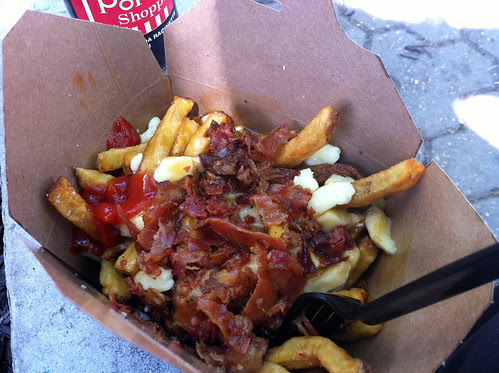 Check out the rest of the photos from this trip: HERE!
Posted by Cody Lobreau at 16:12