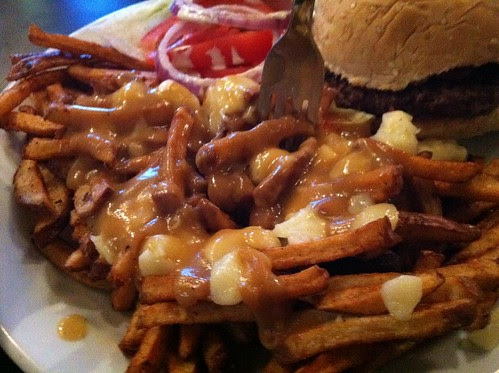 Le Garage has been on my Poutine bucket list since April 2009, when a friend of mine told me that she had one of the best poutines in her life there.

It took me nearly 3 years but I finally went to Le Garage, which is in the heart of French Winnipeg in Saint Boniface. I went in not knowing what to expect. The atmosphere was quite nice, a nice roomy restaurant with lots of sitting space.

I ordered a petite poutine with a hamburger and a beer which I swear was Coors Light.

The burger was quite tasty, had a very homemade taste, not sure what to say, but nice richness in the beef, great bun, very hard to put down!

The poutine came with thin fresh homecut fries, nice and hot - but some of the fries were actually quite cold. The sauce was your usual poutine sauce, a bit similar to what you can get at a grocery store (ie McCormick's poutine sauce), but better and for some reason had a bit of sweetness like ketchup to it. The curds were your standard white cheddar Bothwell curds. I find Bothwell curds generally too large for a poutine, but they were consistently decent bite size in this cae.

I had some black burnt fries in my batch of poutine, but it didn't bother me as they were at the very bottom and very noticeable. The sauce was warm, but not hot, but had a nice thick consistency - not chunky and not watery. Watery poutine quite often ends up being a mess.

For it being a petite poutine, it was VERY plentiful amount, you get a lot of bang for your buck.

I give this 3.5 curds out of 5! I paid $20 before tax/tip for a petite poutine, hamburger and a beer that I assume was Coors Light. Their beer selection was pretty minimal for on tap as they didn't have Half Pints' Little Scrapper IPA on tap. 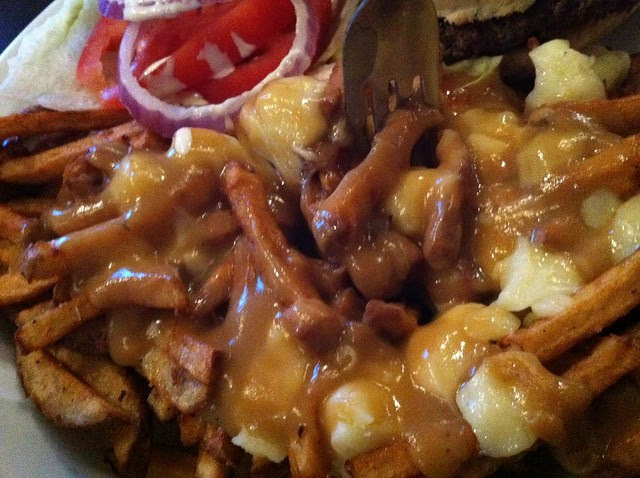