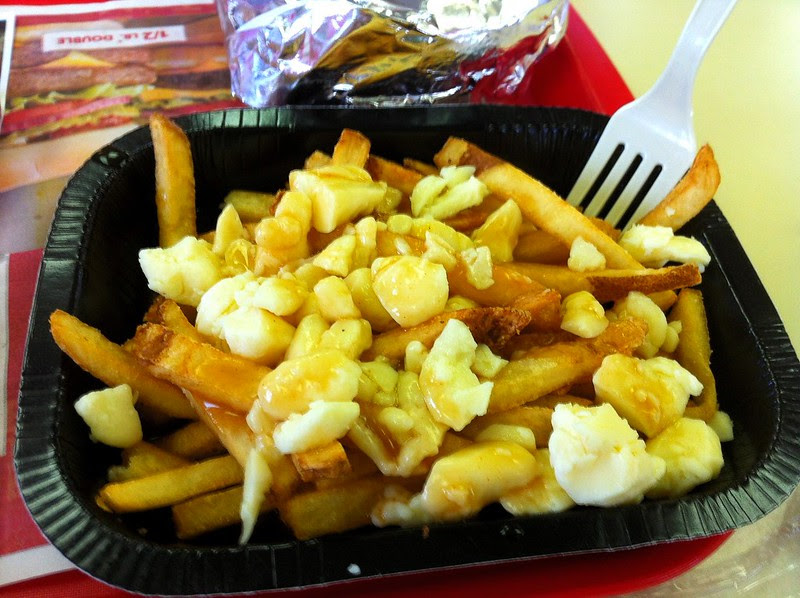 Hey look, poutine is finally getting recognition by more of the big players in the fast food market today! Wendy's recently launched a petition, or as they call it - a poutition to make poutine the national dish of Canada. You can sign the petition poutition at Poutition.ca - but it requires you to have Facebook account - booooooo!

I signed the poutition, which gave me a coupon for a free combo upgrade to poutine, so here we are.. time for another poutine review!

In the last two years, Wendy's has been revamping their menu and completely changed several of their classic items, including - skin-on fries with sea salt, and thicker hamburgers with butter toasted buns.. mmm... but poutine? That's an entirely new field for Wendy's.

Since I got a free combo upgrade, I excitedly wanted to try Wendys' new poutine. Ordering it was a bit of a challenge as the staff at the Wendy's weren't sure what to do with the coupon. After a few minutes of frustration on their part, they were able to put it through for free.

The combo consisting of a double hamburger on a butter toasted bun (om!), a Coke (free refills!) and of course, the poutine. The combo cost a bit over $8, quite pricey but for quality, I'd rather get that than a McDouble combo at McDonalds.

The poutine arrived quite quickly. The fries were fresh from the frier, so they were hot, steaming, crispy on the outside, fluffy on the inside. The gravy, on the other hand was luke warm, just warmer than room temperature. The gravy itself was quite mediocre as it's nearly identical to the gravy that's also found at A&W and Burger King, a bland and salty "sauce", peppery and slightly beefy - very minimal gravy. That said, it's not a soupy mixture like either BK or A&W's, it was thicker and held with the rest of the poutine fine, instead of making everything soggy. The curds were your standard fast food curds though there was a decent amount of squeak going on! I appreciate a good squeak in the curds.

Overall, it was your average fast food poutine. I appreciate that Wendy's is trying to push for a finer fast food experience. I haven't had a bad meal at Wendy's since before they changed their fries. Prior to the skin-on fries, it was more likely than not that I would receive a batch of ice cold fries, but now.. always piping hot and fresh! Less salt too and just generally decent. If they had used the old fries for the poutine, I would have written off this poutine completely.

Remember to sign the Poutition!
Posted by Cody Lobreau at 17:12